Burt Rutan’s SkiGull successfully took to the air for the first time from Coeur d’Alene Airport in northern Idaho in late November. “We’ve learned a hell of a lot today that I can check off ‘these are not problems’” a delighted Rutan said in a celebratory toast in front of crew and family following SkiGull’s first flight.

Burt also acknowledged that there’s still plenty of work to do before he can call SkiGull a finished product. He’s got to get the skis to work.

“If I stop, all I’ve got is just another seaplane. I don’t have something that’s a research breakthrough. And that’s what I’m after. I’m seriously after something that we’ll look back and say, ‘what this airplane is and is able to do, in terms of operating in beaches, rough water, and have the kind of capabilities that it has, is not just something a little better than the best floatplane, but something that is really truly breakthrough in nature.’”

SkiGull, which is to be the last plane Burt will build, spent over an hour and a half in the air with seasoned test pilot Glenn Smith at the helm. Photographer and aviation journalist Mike Satren was on hand and provides a remarkably detailed account of the first flight here.

Engine starts just prior to flight 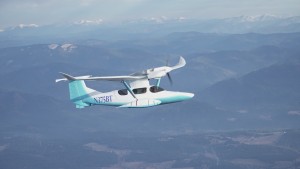 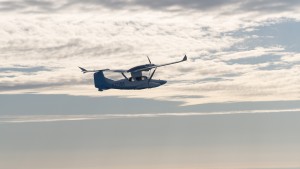 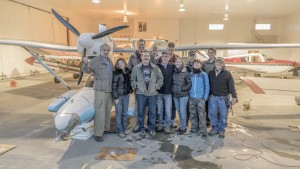 Test pilot Glenn Smith reports the first flight tests confirmed SkiGull to be dynamically and positively stable in each axis. Burt was also pleased with the speed and stability of the aircraft, as it underwent testing in both cruising and landing configurations.

Burt is spending the Idaho winter perfecting the aircraft, including adjustments to the wing-stall buffeting, pitot tube, and nose-low water tendencies, as well as installation of new landing gear skis.